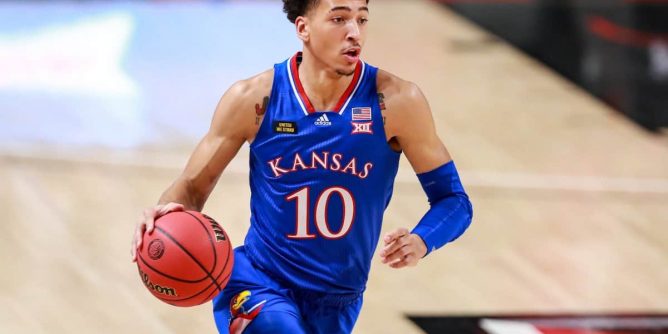 The first game on Sunday of the Elite Eight gives us the tenth-seeded Miami Hurricanes (26-10) matched up against the top-seeded Kansas Jayhawks (31-6). The winner of the contest will claim the Midwest Region and advance to the Final Four in New Orleans. Miami got here with a 70-56 victory over Iowa State on Friday, and Kansas took down Providence, 66-61, to advance.

Sunday’s tip-off is at 2:20 p.m. EST inside the United Center in Chicago, IL. The contest will be broadcasted on CBS. Kansas opens as a 6-point favorite, and the over-under total is at 147.5 points.

What to Know – #10 Miami Hurricanes

Not to be overshadowed by Saint Peter’s, the Miami Hurricanes are putting together a Cinderella run of their own after securing its first Elite Eight appearance in school history. The fourth-place finishers in the ACC have hit their stride in recent contests with back-to-back double-digit victories. Miami is the 35th ranked team according to KenPom.

Kameron McGusty scored a game-high 27 points, leading Miami to a convincing victory over the Cyclones in the Sweet 16. Jordan Miller added 16 points, and Sam Waardenburg chipped in 13. Miami’s defense stepped up, holding Iowa State to 36.8% shooting and forcing 18 turnovers.

The Hurricanes are 21-15 against the spread and 5-4 ATS playing at a neutral location. Miami is 2-5 ATS over its last seven contests against teams from the Big 12 Conference.

What to Know – #1 Kansas Jayhawks

The last remaining one-seed in the tournament, the Kansas Jayhawks return to the Elite Eight for the fifth time over the past ten seasons. A win over the Hurricanes moves Kansas to its 16th Final Four appearance and fourth under head coach Bill Self. Kansas sits in fifth in the KenPom rankings heading into Sunday’s tilt.

The Jayhawks were never able to put the pesky Friars away, but Kansas took care of business against Providence thanks to 23 points off the bench from Remy Martin. The former USC Trojan has averaged 21.5 points over the last two games for Kansas. Jalen Wilson added 16 points and grabbed ten rebounds.

Kansas has an 18-19 record ATS with a 5-4 mark ATS on a neutral floor. Over their last seven games playing as favorites, the Jayhawks are 5-2 ATS.

Sunday’s first game should be a good one when these two teams take the floor. Miami will need another stellar game defensively if they want a shot at knocking off Kansas, and we think they come ready to play. We like Kansas to win, but the Jayhawks’ inability to pull away from opponents leads us to lean on the Hurricanes getting the points.