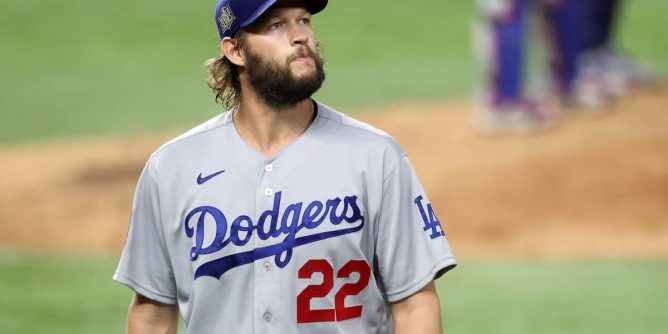 The San Francisco Giants (31-26, 15-13 home) continue its three-game series against the Los Angeles Dodgers (37-21, 20-11 away) on Saturday night in the Bay Area. San Francisco took the opener Friday night, 7-2, beating the Dodgers for the first time in three tries this year.

The first pitch of the contest is scheduled for 7:15 p.m. EST at Oracle Park in San Francisco, California. Los Angeles is a -160 road favorite, and the over-under total is 8.0 runs.

Los Angeles has dropped six of its last ten games in a bit of a shaky stretch for one of the best teams in baseball. The Dodgers’ recent slide has left L.A. with only a one-game lead over the San Diego Padres in the National League West.

On the hill for the visitors is probably starter Clayton Kershaw (4-0, 1.80 ERA, 0.73 WHIP). Kershaw, who’s been on the 15-day IL since early May, was nothing short of phenomenal in five starts prior to his injury. The 34-year-old has thrown 30.0 innings and surrendered six earned runs on 19 hits and three walks, with 32 strikeouts.

Trea Turner is hitting .301 with a team-high 46 RBI in a Dodgers’ lineup that is stacked with all-star talent. Mookie Betts, the team’s leadoff hitter, leads L.A. with 16 home runs. Freddie Freeman, who joined the Dodgers in the offseason, is batting .289 with four home runs, 33 RBI, and 37 runs scored.

The Dodgers are ninth in the majors with a .249 team batting average that produces 5.3 runs per game. L.A.’s pitching staff is second in the MLB and first in the NL with a sparkling 3.07 team earned run average.

What to Know – San Francisco Giants

The Giants’ up-and-down season hasn’t stopped in June, with a 5-5 record over their last ten games. San Francisco is five games over .500 and six games back of the Dodgers in the NL West.

Left-hander Sam Long (0-1, 2.35 ERA, 1.04 WHIP) will try to keep the good times rolling for the Giants. Long’s longest outing of the year came in his last trip to the mound when he tossed 3.0 innings against the Colorado Rockies earlier this week. The 26-year-old has appeared in 11 games this season, making three starts.

The Giants’ offensive lineup has seen different players step up at different times this year. Wilmer Flores has a team-high 33 RBIs, while Joc Pederson is the only Giants player with double-digit home runs (13).

San Francisco’s offense scores 5.0 runs per contest thanks to a .243 team batting average that ranks 15th in the league. The Giants’ pitching staff sits in 21st amongst MLB teams with a 4.18 team ERA.

The Dodgers get Kershaw back on the mound, and it’s hard to imagine L.A. dropping two games in a row against their division rival. San Francisco will send multiple pitchers out to challenge the Dodgers on Saturday night, and they’ll become victim to the Dodgers’ powerful lineup.