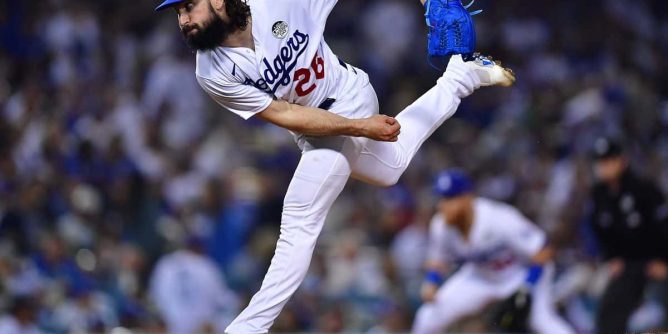 The Milwaukee Brewers (62-53, 30-23 home) hosts the Los Angeles Dodgers (80-35, 40-20 away) in the third contest of a four-game National League series between two playoff hopefuls. Los Angeles opened up with a 4-0 victory, and the Brewers countered with a 5-4 victory on Tuesday night.

The first pitch of Wednesday’s battle is at 8:10 p.m. EST at American Family Field in Milwaukee, Wisconsin. Los Angeles opens as the betting favorite at -180, and the over-under total is eight runs.

The Dodgers have dropped two of their last three contests but became the first team in the MLB to win 80 games this season. Los Angeles holds the best record in baseball and remains well out in front in the NL West.

Right-hander Tony Gonsolin (14-1, 2.24 ERA, 0.89 WHIP) gets the start for the visitors. Gonsolin has been one of the top pitchers in baseball this season, ranking second in wins and fourth in ERA. The 28-year-old has pitched 116.1 innings, surrendering 29 earned runs on 71 hits and 32 walks while striking out 105 batters.

Trea Turner has driven in 83 runs, and Mookie Betts owns a team-high 27 home runs. Freddie Freeman is third in the majors sporting a .320 batting average. The Dodgers’ offense is stacked from top to bottom, with six batters driving in 50 or more RBIs this season.

Los Angeles is third in the league batting .260 as a team and averaging 5.4 runs per game. The Dodgers’ pitching staff is the best in the MLB, featuring a 2.88 team earned run average.

What to Know – Milwaukee Brewers

Milwaukee’s walk-off win on Tuesday snapped a two-game losing streak as the Brewers battle the St. Louis Cardinals for the top position in the NL Central. The Brewers sit just two games back of St. Louis and one game back of the final Wild Card spot.

No one is going to claim any batting titles in the Brewers’ offense, but Milwaukee has a handful of run-producing bats in the lineup. Rowdy Tellez, Willy Adames, and Hunter Renfroe have all hit 20 home runs or more and combined to drive in 184 runs. Christian Yelich leads the team with 103 hits and 73 runs scored, ninth in the MLB.

The Brewers’ offense plates 4.5 runs per contest and rank 22nd in the majors with a .237 team batting average. Milwaukee’s pitching staff is 12th in the MLB, showcasing a 3.81 team ERA.

Gonsolin on the hill provides a tough test for the hosts, as he’s considered one of the top pitchers in the NL this season. Add a strong starter with the Dodgers offense, and it’s going to be a long night for the Brewers. Take the Dodgers with confidence.