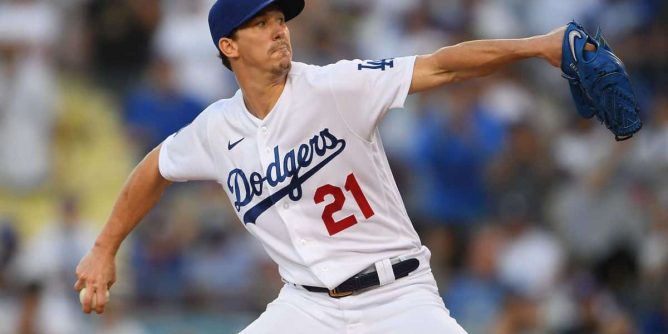 The Chicago Cubs (9-17, 4-10 home) take on the Los Angeles Dodgers (18-7, 8-5 away) on ESPN’s Sunday Night Baseball. Sunday’s showdown is the series finale of a three-game set. The Dodgers have won the first two battles against the Cubs.

The first pitch is scheduled for 7 p.m. EST at Wrigley Field in Chicago, IL. Los Angeles is the betting favorite (-200) on the moneyline, and the over-under total is seven runs.

Los Angeles comes into Sunday’s tilt riding a five-game winning streak and sporting one of the best records in the MLB. The Dodgers have vaulted to the top spot in the NL West, holding a 1.5-game advantage over the San Diego Padres.

The expected starter for Los Angeles is right-hander Walker Buehler (3-1, 2.12 ERA, 1.11 WHIP). The Dodgers’ no. 1 starter hasn’t allowed an earned run over his last two trips to the mound. For the year, the 27-year-old has thrown 24.2 innings, allowing seven earned runs on 20 hits, six walks, with 21 strikeouts.

The Dodgers lineup is littered with All-Star hitters from top to bottom. Shortstop Trea Turner leads the team with 20 runs driven in, while outfielder Mookie Betts has a team-high five home runs out of the leadoff spot.

Los Angeles scores 5.1 runs per game thanks to a .237 team batting average that ranks 13th in the majors. The Dodgers’ pitching staff is one of the best statistically in the majors, with a league-best 2.11 earn run average.

What to Know – Chicago Cubs

Chicago delt many of its key pieces last season prior to the trade deadline as the franchise goes through a rebuild in 2022. The Cubs have dropped their last four contests and sit in fourth place in the NL Central.

Taking the ball for the Cubbies is the 31-year-old Marcus Stroman (1-3, 5.13 ERA, 1.18 WHIP). The right-hander hasn’t produced the outcomes Chicago expected when they signed in him the offseason to be the team’s no. 1, but he’s performed better in recent outings. Stroman’s appeared in five games, twirling 26.1 innings, surrendering 15 earned runs on 24 hits, seven walks while collecting 22 strikeouts.

A pair of budding stars have been the driving force for Chicago’s offense over the first month of action. Third baseman Patrick Wisdom has five home runs and 15 RBI, and outfielder Seiya Suzuki has connected on four round-trippers and driven in 14.

Sunday’s featured contest showcases a team ready to get back to the World Series and team that is a few years away from contending again. Los Angeles has a clear edge offensively, defensively, and on the mound. Don’t overthink this one.