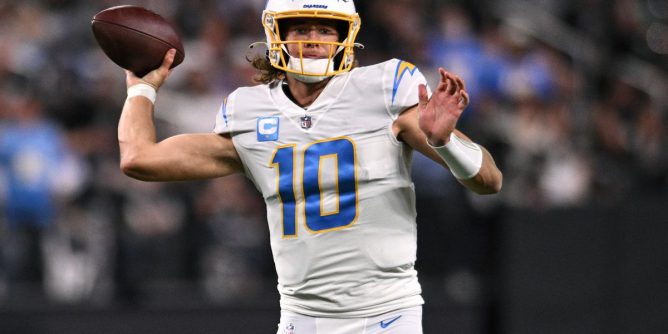 The second week of the NFL regular season opens with a Thursday Night Football contest between the Kansas City Chiefs (1-0, 0-0 home) and the Los Angeles Chargers (1-0, 0-0 away). Both teams picked up victories in their season opener last week, with the Chiefs downing the Arizona Cardinals, 44-21, and the Chargers upending the Las Vegas Raiders, 24-19.

Thursday’s kickoff is at 8:15 p.m. EST at GEHA Field at Arrowhead Stadium in Kansas City, Missouri. Kansas City is a four-point favorite, and the over-under total for the contest is 54.0 points.

What to Know – Los Angeles Chargers

Los Angeles opened the season with a bounce-back victory over the Raiders after dropping its last three of four last season and missing the postseason. The Chargers are one of the postseason favorites this year, second behind the Chiefs in the AFC at most sportsbooks.

Justin Herbert looked sharp in his season debut, tossing three touchdown passes and completing 26-of-34 passes for 279 yards. The third-year quarterback out of Oregon didn’t turn the ball over and connected with tight end Gerald Everett in the third quarterback with the game-winning score.

All-purpose running back Austin Ekeler was held in check by the Raiders’ defense, combining for just 72 total yards. Ekeler carried the ball 14 times for 36 yards and hauled in four receptions for 36 yards.

The Chargers will be without leading wideout Keenan Allen for Thursday night’s bout with KC. Allen led L.A. last week with 66 receiving yards but suffered a hamstring injury and won’t be healthy enough to suit up. Look for Mike Williams, Josh Palmer, and tight end Gerald Everett to see a target share increase Thursday night.

What to Know – Kansas City Chiefs

The Chiefs head into their home opener after taking care of business last Sunday in Arizona. Kansas City is projected by many to be the top team in the AFC, with many of last year’s faces back in a Chiefs uniform.

Patrick Mahomes picked up right where he left off, throwing for 360 yards and five touchdowns. Mahomes didn’t appear fazed at the loss of Tyreke Hill in the offseason, throwing touchdown passes to four different receivers.

Clyde Edwards-Helaire carried the ball seven times for 42 yards but did most of his damage in the passing game, catching three passes for 32 yards and a pair of touchdowns. Rookie rusher Isiah Pacheco carried the rock 12 times for 62 yards and a touchdown in his rookie debut.

Tight end Travis Kelce hauled in eight receptions to eclipse the 100-yard receiving mark, tallying 121 yards through the air and the Chiefs’ first touchdown of the season. Wideout JuJu Smith-Schuster, signed in the offseason from Pittsburgh, led the receiving core with six receptions for 79 yards.

Two of the top teams in the AFC with a pair of the top offenses go toe-to-toe in another thrilling Thursday night battle. Last week’s Rams vs. Bills didn’t live up to the hype, but this one should.

Last season these two teams combined to score 54 and 62 points in their two meetings, and we expect another high-scoring affair Thursday.