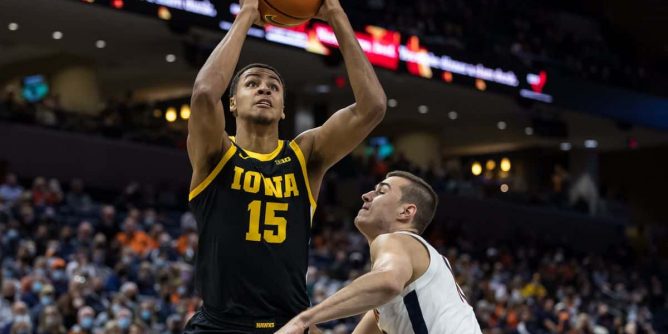 The #24 Iowa Hawkeyes (22-8, 12-7 Big Ten) matchup against the #20 Illinois Fighting Illini (21-8, 14-5 Big Ten) to conclude their Big Ten and regular-season schedules. The two teams met earlier this season in Iowa City, with the Fighting Illini handing the Hawkeyes an 87-83 home defeat.

Iowa tries to end their season, winning six-straight, and evening the season series against their rival to the east. The Hawkeyes rank 14th in the KenPom and 15th in the NCAA NET rankings.

On Thursday night, Iowa built up a 17-point first-half lead and never looked back in an 82-71 rout of the Michigan Wolverines. Keegan Murray scored a game-high 23 points, pouring in 15 of those in the first half. Jordan Bohannon and Kris Murray added 19 points apiece for the Hawkeyes.

The Hawkeyes are 18-12 against the spread with a 6-5 mark on the road. Iowa is 4-1 ATS over its last five games and 6-3 ATS in its previous nine against the Fighting Illini.

What to Know – #20 Illinois Fighting Illini

There is a lot on the line for the Fighting Illini heading into their regular-season finale. A loss earlier in the day by Wisconsin and a victory for Illinois gives the Illini a share of the Big Ten crown. Illinois is 18th in the KenPom and 15th in the NCAA NET.

It wasn’t pretty, but the Fighting Illini pulled away late for a 60-55 win over the Penn State Nittany Lions Thursday evening in Champaign. Illinois hit only 36.0% of its shots from the field and got rebounded, 34-29. Da’Monte Williams led the Illini with 14 points.

There is a lot on the line for Sunday’s Big Ten showdown between the Hawkeyes and Fighting Illini. The two teams are similar in many ways, and you can expect a narrow contest as the teams look to end the regular season on a high note.

Illinois is a tough place to play, but the recent play by the Hawkeyes led us to favor Iowa and the points.