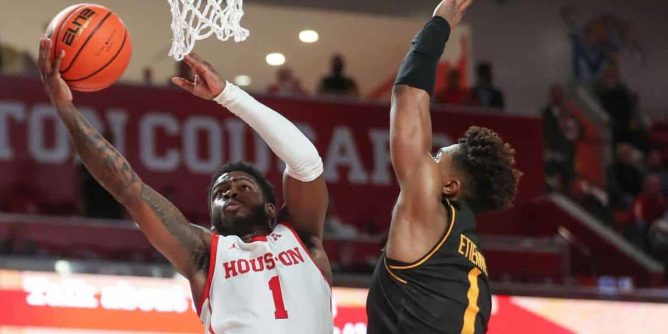 The South Region title is set with the fifth-seeded Houston Cougars (32-5), taking on the second-seeded Villanova Wildcats (29-7) with a trip to the Final Four on the line. Houston defeated the top-seeded Arizona Wildcats (72-60) to get to the weekend, while the Wildcats survived against Michigan (63-55).

Saturday’s tip-off is at 6:10 p.m. EST inside the AT&T Center in San Antonio, TX. The broadcast will be carried on TBS. Houston opens as a 2.5-point favorite, and the over-under total is at 128.5 points.

What to Know – #5 Houston Cougars

The Cougars can return to the Final Four for the second-straight year with a victory Saturday night. Under the direction of head coach Kelvin Sampson, Houston won the American Athletic Conference and is the second-ranked team in the KenPom.

Jamal Shead and Kyler Edwards combined for 40 points to lead the Cougars to the upset victory over the Arizona Wildcats. Edwards hit five 3-pointers, including a game-clinching trey with 1:16 remaining in the contest. The Cougars’ defense held Arizona to 33.3% shooting and forced 14 turnovers.

This year, Houston is 25-12 against the spread with a 9-1 mark ATS on a neutral floor. The Cougars are 6-0 ATS over their last six contests.

What to Know – #2 Villanova Wildcats

A model of consistency, the Wildcats are one of the final eight teams for the third time since 2016. The last two times they made it this far, the Wildcats went on to hoist the national title trophy. Villanova finished second in the Big East, a half-game behind Providence, and is 11th in the KenPom rankings.

Villanova 19-15-2 ATS and 5-3 ATS at a neutral location. The Wildcats are 1-4-1 ATS in their last six games, entering the contest as the betting underdog.

The first game of the Elite Eight doubleheader on Saturday should not disappoint. Houston and Villanova are similar statistically and have elite head coaches on their sideline.

This one should be a back-and-forth battle, but what we saw out of Houston on Thursday leads us the believe this team is on a mission and peaking at the right time. We like the Cougars to cover and punch their ticket to New Orleans.