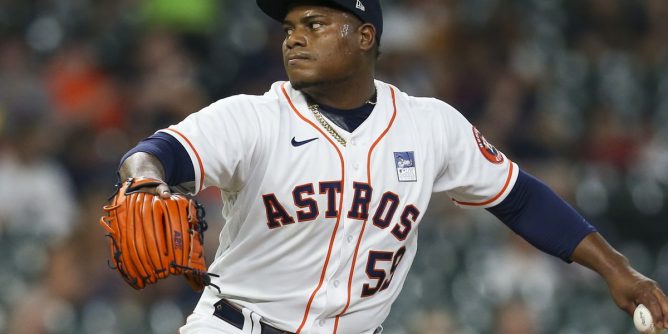 The Seattle Mariners (51-44, 24-22 home) battle the Houston Astros (63-32, 33-18 away) in the series finale of a three-game set. Seattle looks to avoid being swept after Houston took Friday and Saturday’s contests. Houston owns a 3-1 record against the Mariners this season.

The first pitch of Sunday’s contest is at 4:10 p.m. EST at T-Mobile Park in Seattle, Washington. The Astros are a slight favorite in the finale at -125, and the over-under total is seven runs.

Houston tries to run its winning streak to five games along with sweeping the opening series of the second half. The Astros own the top spot in the American League West, 12 games clear of these Mariners.

The probable starter for the visitors is lefty Framber Valdez (8-4, 2.66 ERA, 1.13 WHIP). Valdez’s excellence on the hill in the first half led to his first All-Star appearance last week and securing the victory for the AL. The 28-year-old threw 115.0 innings in the first half, allowing 34 earned runs on 87 hits and 43 walks with 102 strikeouts.

Houston’s strong offense is led by the hitting of Yordan Alvarez with a .307 batting average, 28 home runs, and 65 runs batted in. The 25-year-old Kyle Tucker has driven in 63 and leads the Astros with 16 stolen bases. Alex Bregman adds 49 RBIs behind 12 home runs.

The Astros are 17th in the majors with a .240 team batting average, scoring 4.4 runs per game. Houston’s pitching staff is the best in the AL, with a 2.96 team earned run average.

What to Know – Seattle Mariners

The Mariners were the talk of the MLB to close out the first half, winning their final 14 games and soaring up the AL West standings. With a solid second half, Seattle will return to the postseason for the first time since 2016.

Rookie sensation Julio Rodriguez sparked the Mariners’ offense once he got the call up, leading to an All-Star appearance as a 21-year-old. The outfielder blasted 16 home runs and drove in 523 RBIs in 91 games but didn’t suit up Saturday and is listed as day-to-day with a wrist injury. Look for Eugenio Suarez and Ty France to pick up the offense if Rodriguez can’t go Sunday.

Seattle is averages 4.1 runs per contest behind an offense that’s 24th in the league with a .235 team batting average. The pitching staff for the Mariners ranks fifth in the MLB with a 3.54 team ERA.

Two solid pitchers go head-to-head in Sunday’s afternoon action. The Mariners don’t want to get dealt a sweep at the hands of the team they are trying to chase down in the division. Seattle’s bats wake up, and the Mariners hand the Astros the loss.