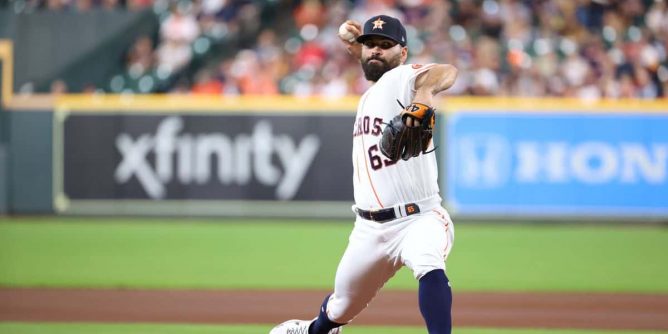 The Houston Astros (33-18, 19-12 away) visit the Kansas City Royals (16-33, 8-15 home) for a three-game series this weekend, beginning Friday night with the series-opener. Friday’s matchup will be the first time these two AL foes have clashed this season.

The first pitch is scheduled for 8:10 p.m. EST at Kauffman Stadium in Kansas City, Missouri. Houston is a road favorite (-130), and the over-under run total is nine runs.

Houston heads into the weekend on a four-game winning streak after sweeping their series against Oakland earlier this week. The Astros have one of the best records in baseball and have built up a sizable 6.5-game lead in the AL West.

On the hill for Houston is extended to be right-hander Jose Urquidy (4-2, 4.80 ERA, 1.58 WHIP). The 27-year-old will look to bounce back after a rough outing in his previous start, surrendering five earned runs over 4.2 innings in a loss to Seattle. Urquidy has pitched 45.0 innings this year, scattering 64 hits, allowing 24 earned runs, with seven walks and 34 strikeouts.

Yordan Alvarez paces the Astros’ powerful offense, leading in the team with 14 home runs and 31 runs driven in. Kyle Tucker has eight home runs and 29 RBI to go along with nine stolen and has picked up right where he left off a the plate last season.

The Astros bat .230 as a team, 25th in the majors, averaging 4.0 runs per game. Houston’s pitching staff as a 2.84 team earned run average, third-best in the MLB and second-best in the AL.

What to Know – Kansas City Royals

The Royals have dropped five of their last six games, including four in a row heading into this weekend’s series. Kansas City, currently in a franchise re-build, sits in last place in the AL Central, 12 games back of the first-place Minnesota Twins.

The expected starter for the Royals is right-hander Brady Singer (2-0, 2.49 ERA, 0.99 WHIP). The 25-year-old has been fantastic on the hill in limited action this year, allowing just seven earned runs over 25.1 innings of work. Singer hurled 5.2 innings in his last outing, giving up three earned runs on six hits, no walks, with eight strike outs.

Andrew Benintendi continues to be a tough out at the plate for the Royals, hitting .337 through 49 games played. That batting average is eighth-best in the MLB. Whit Merrifield and the rookie Bobby Witt Jr. lead Kansas City with 24 RBI each.

Kansas City ranks 18th in the league with a .237 team batting average and scoring 3.7 runs per game. The Royals’ pitching staff boasts a 5.07 team ERA, 27th in the majors and last in the AL.

Houston head to Kansas City with a lot of momentum following the sweep at Oakland. Singer has been solid on the mound for the Royals, but the lineup of Houston will be too much. Urquidy struggles, but the Astros pick him up offensively to keep the winning streak going.