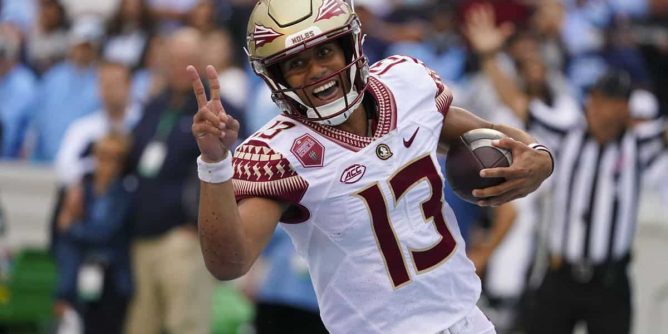 The LSU Tigers and Florida State Seminoles (1-0) take center stage on Sunday as the lone college football contest on television. The two football bluebloods will battle it out in the Allstate Louisiana Kickoff. Florida State holds a 7-2 all-time record against the Tigers.

Sunday’s kickoff is at 7:30 p.m. EST inside the Caesars Superdome in New Orleans, Louisiana. LSU opens as a three-point favorite, and the over/under total is 51.5 points.

What to Know – Florida State Seminoles

Florida State enters year three of the Mike Norvell era, and the 40-year-old coach needs to make some noise, or his seat will become hotter and hotter. The Seminoles were picked to finish fifth in the Atlantic Division of the ACC. FSU already has a victory under its belt, dropping FCS program Duquesne last week, 47-7.

The Seminoles’ game plan against the undersized Dukes was a clear focus on the ground game. Three rushers eclipsed 100 yards for FSU, led by redshirt sophomore Treshaun Ward who ran for 127 yards and two touchdowns. Florida State scored six touchdowns on the ground and racked up 406 yards rushing.

Oregon transfer Mycah Pittman headlines the receiving core for FSU, and the junior caught four passes for 44 yards in his debut. Backup pass-catcher Kentron Poitier led all receivers with four receptions for 84 yards.

FSU’s defense held the Dukes to 164 total yards and 11 first downs in the lopsided victory.

What to Know – LSU Tigers

The Tigers‘ 2021 season was derailed by the removal of head coach Ed Orgeron during the campaign. LSU made a splash hire in the offseason, getting former Notre Dame head coach Brian Kelly to head to Bayou. Media has the Tigers projected to finish fifth in the SEC West.

Quarterback play was down for the Tigers in 2021, so the new LSU brass plucked Arizona State transfer Jayden Daniels from the portal. Daniels threw for 2,380 yards and added 710 on the ground last year as the Sun Devils’ starter.

Another transfer will start in the backfield in Noah Cain. The Baton Rouge native transferred into LSU after three seasons at Penn State. Cain has 806 yards and 12 touchdowns in his collegiate career.

The top five receivers from last year’s team return. Headlining the group is junior Kayshon Boutte, a preseason first-team All-American despite missing the final seven games of the 2021 season. He holds the SEC single-game record for receiving yards with 308 against Ole Miss in 2020.

LSU’s defense should also take a step forward with many faces returning and key transfers in the secondary.

It is safe to say the Seminoles looked improved last week, even if it was against an inferior opponent. The roster talent is there for Kelly and the Tigers, with key transfer pieces bolstering both sides of the ball. Kelly is the better coach here, and his roster has more talent as well.