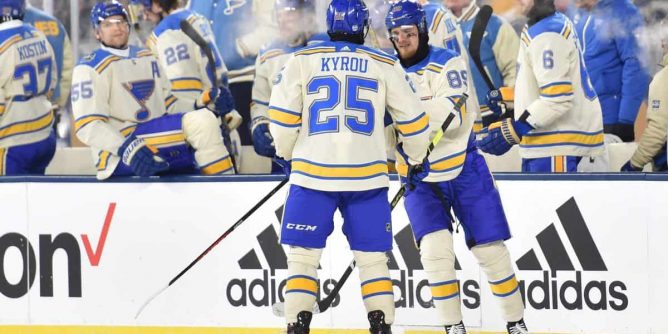 After a dramatic comeback in the final period of Game 5, the St. Louis Blues and Colorado Avalanche return to St. Louis for Game 6 of the West 2nd Round.

The Blues kept their playoff hopes alive with a goal to tie it in the closing seconds of Wednesday’s Game 5 to force overtime. St. Louis poured in the game-winner in the extra period in the intense win-or-go-home contest.

The puck drops at 8 p.m. EST inside the Enterprise Center in St. Louis, Missouri. Colorado comes into the tilt as the betting favorite (-175), and the over-under total is 6.5 goals.

What to Know – Colorado Avalanche

The Avalanche has to have a short memory after Wednesday’s heartbreaker, but Colorado still controls the series with a 3-2 advantage. Colorado, the top seed in the West, has lost in the Stanley Cup playoff second round the past three seasons.

Nathan Mackinnon did all he could to advance the Avalanche to the West Finals. Mackinnon’s hat trick put Colorado ahead, 4-3, with under three minutes remaining in the final period. The 26-year-old had his hand in all four Colorado goals, dishing an assist to Gabriel Landeskog in the second period.

What to Know – St. Louis Blues

St. Louis played with guts in Game 5 to keep the series alive and get another opportunity on its home ice. The three seed in the West has been knocked out of the playoffs in the first round since their Stanley Cup victory in 2019.

Jordan Kyrou scored the equalizer for the Blues in the third period, even the score after the Blues trailed 3-0 in the second period. Robert Thomas netted a pair of goals, including the game-tying point with 56 seconds remaining in the contest. Tyler Bozak capped the Blues’ rally with a goal 3:38 into the overtime period.

St. Louis has come back from a 3-1 deficit twice in its franchise history, accomplishing the feat last time in 1999 against Phoenix. The Blues showed a resilient demeanor in Game 5 with a heroic comeback victory.

Colorado has the better team on paper, and the Avalanche will carry a chip on their shoulder heading into Friday’s showdown, knowing they were less than a minute away from winning the series.

The Avalanche is the favorite, but we feel confident about St. Louis on its home ice.