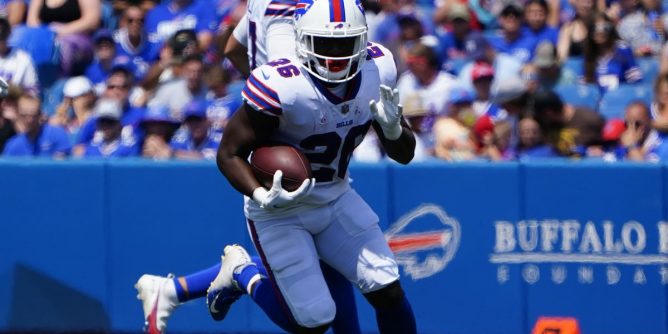 The Los Angeles Rams and Buffalo Bills kickoff Week 1 of the NFL slate with a riveting AFC vs. NFC showdown in SoCal. The two teams didn’t face each other last season but did in 2020, with the Bills handing the Rams a 35-32 loss.

Thursday night’s kickoff is at 8:20 p.m. EST inside SoFi Stadium in Inglewood, California. The Bills are currently a 2.5-point road favorite, and the over-under total is 52.0 points.

What to Know – Buffalo Bills

Expectations are high entering the 2022 season for head coach Sean McDermott and the Buffalo Bills after winning the AFC East and advancing to the Divisional Round of last season’s playoffs. The Bills are one of the preseason favorites to hoist the Lombardi Trophy this season.

The success of Buffalo starts at quarterback with the play of quarterback Josh Allen. Allen threw for 4,407 yards and 36 touchdowns in 2021 and signed a six-year deal before the season to be the Bills’ quarterback through 2027.

Devin Singletary was the team’s leading rusher last season, with Allen right behind him. Singletary finished the season with 870 yards and seven touchdowns. The Bills added James Cook to the roster in this year’s NFL Draft, so expect to see the rookie rusher also garner some playing time.

Stefon Diggs is back at wide receiver after posting 103 receptions for 1,225 yards and ten touchdowns. Cole Beasley and Emmanual Sanders have moved on, but the play of Gabe Davis over the final weeks have Bills’ brass with high expectations. Slot receiver Isaiah McKenzie will also see a boost in production as he takes over Beasley’s role.

What to Know – Los Angeles Rams

The Los Angeles Rams are another team with lofty goals as the defending Super Bowl champions. Under the direction of sixth-year head coach Sean McVay, the Rams have found themselves in the postseason in four of his first five seasons as coach.

Matthew Stafford should be healthy and ready to go at quarterback after missing the preseason with an elbow injury. Stafford threw for 4,886 yards and 41 touchdowns, completing 67.2% of his passes. He inked a four-year extension with the Rams in the offseason.

Expected starting running back Cam Akers missed the entire regular season after suffering a torn ACL but was able to rehab in time to play in the Super Bowl.

Akers and Darrell Henderson Jr. are expected to share the workload out of the backfield to begin the year. Henderson was the Rams’ second-leading rusher, tallying 688 yards and five touchdowns in 2021.

The wide receiving core is led by last year’s NFL Offensive Player of the Year and Super Bowl MVP Cooper Kupp. The talented pass-catcher erupted last year with 1,947 receiving yards and 16 touchdowns. Allen Robinson II was signed in the offseason to run opposite of Kupp.

What an excellent matchup NFL fans get on Thursday night to kick off the 2022 season. Two top teams in 2021 go head-to-head in what should be a fantastic contest.