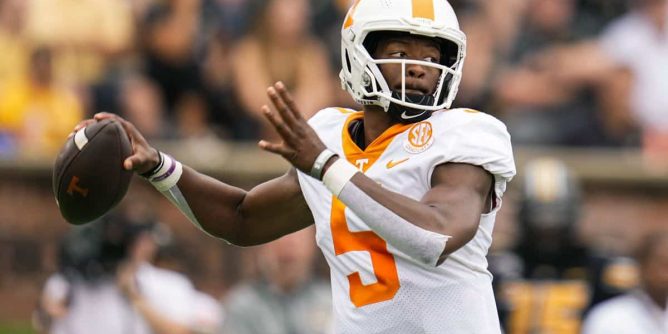 The Tennessee Volunteers (0-0) open the 2022 season at home in a non-conference clash with the Ball State Cardinals (0-0). The season-opening matchup marks the first time these two schools will meet.

Kickoff for Thursday’s contest is at 7 p.m. EST inside Neyland Stadium in Knoxville, Tennessee. The Volunteers are currently a 35-point favorite, and the over/under total is 68.0 points.

What to Know – Ball State Cardinals

The Cardinals enter the 2022 season after posting a 6-7 record last year, a year removed from winning the MAC Championship in the shortened 2020 campaign. Ball State is coached by Mark Neu, who is in his seventh season as the leader of the Cardinals. In a preseason poll conducted by the media, the Cardinals were slated to finish last in the MAC West division.

Ball State has a lot of holes to fill from last season’s squad, including a new signal-caller under center. Gone is three-year starter Drew Plitt and making his first collegiate start will be John Paddock. Paddock has limited experience during his career at Ball State, completing 24-of-34 passes with no touchdowns.

Sophomore rusher Carson Steele is back as the lead back after an excellent freshman season. Steele led the Cardinals on the ground with 192 carries for 891 yards and six scores. Senior Will Jones elected to use his fifth year and come back to Muncie. Jones was second on the team last season, rushing for 300 yards and three touchdowns.

Two of the top three wideouts are in the fold from last year’s team. Senior Jayson Jackson paced the receivers for Ball State with 829 yards and five touchdowns on 69 receptions. Classmate Yo’Heinz Tyler is back after finishing third on the team with 49 receptions, 487 yards, and six scores.

What to Know – Tennessee Volunteers

Expectations are again high in Knoxville as the Tennessee Volunteers come into the 2022 season as a dark horse pick by many to make some noise in the SEC. The Vols were picked to finish third in the SEC East. Second-year head coach Josh Heupel is back after a 6-7 finish in his rookie season.

A reason for optimism is the return of starter quarterback Hendon Hooker. The former Virginia Tech play caller returned to Tennessee after throwing 31 touchdowns to just three interceptions last season. Hooker added 620 yards on the ground and five touchdowns.

Leading rusher Jabari Small is back in the backfield after rushing for 792 yards and nine touchdowns during his sophomore season. Sophomore Jaylen Wright will spell Small from time to time; Wright carried the ball 85 times for 409 yards and four touchdowns as a freshman.

Neyland Stadium is not the environment you want to be breaking in a new quarterback. Tennessee should have one of the top offenses in the SEC this season, and that will be on display early and often Thursday night. The Vols’ defense still has a lot of question marks, and we expect the Cardinals to find the endzone a few times in a blowout loss.