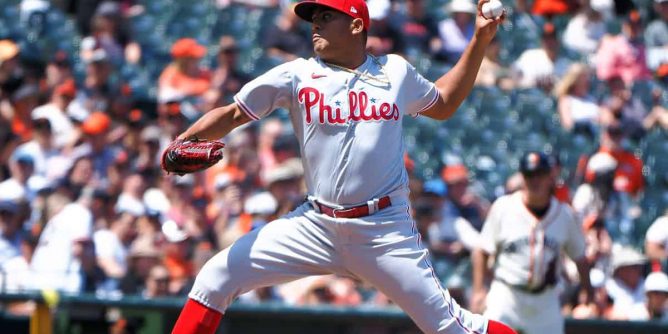 Atlanta bounced the Phillies in the opener on Tuesday, 5-3. The Braves own a 3-2 advantage over Philadelphia in head-to-head games this year.

Wednesday’s first pitch is scheduled for 7:05 p.m. EST at Citizens Bank Park in Philadelphia, PA. The Braves are the betting favorite at -140, and the over-under total is 8.5 runs.

Atlanta looks to drop the Phillies again and inch closer to the division-leading New York Mets. The Braves are 6-4 over their last ten games and sit four games back of the Mets in the NL East.

Right-hander Kyle Wright (8-4, 3.18 ERA, 1.16 WHIP) is the expected starter for the visitors. Wright hopes to cap the month with his fifth win in six starts in June and ninth victory overall this season. The 26-year-old Alabama native has tossed 85.0 innings, allowing 30 earned runs on 72 hits and 27 walks while striking out 92.

With Ozzie Albies and Ronald Acuna Jr. sidelined, the Braves have still provided offensive pop behind the hitting of Austin Riley, Marcell Ozuna, Dansby Swanson, and Matt Olson. Riley and Swanson are tied for a team-best 43 runs batted in, while Swanson carries a .299 batting average. Olson is right behind the RBI leaders with 42 RBI of his own.

The Braves bat .247 as a team, ranking 11th in the MLB, and average 4.7 runs per game. Atlanta’s pitching staff sits eighth in the majors behind a 3.71 team earned run average.

What to Know – Philadelphia Phillies

The Phillies try to close out the month of June on a high note after entering the month seven games below .500 and now sitting three above. Philadelphia has put itself in contention for the postseason and is eight games back of the Mets in the NL East.

Philadelphia is expected to send out left-hander Ranger Suarez (6-4, 4.23 ERA, 1.48 WHIP) to the hill. The 26-year-old product of Venezuela has had his best month on the mound to date, picking up wins in back-to-back starts and lowering his ERA in the process. For the season, Suarez has pitched 72.1 innings, surrendering 34 earned runs on 76 hits and 31 free passes while striking out 57.

The offense took a major hit this week, with Bryce Harper landing on the IL this week with a broken thumb. Without his bat in the order, the production of Kyle Schwarber and company become even more important. Schwarber is putting together a stellar season at the dish, blasting 22 home runs with 47 RBI.

Philadelphia scores 4.7 runs per contest and is 12th in the league with a .247 team batting average. On the mound, the Phillies are 14th in the majors with a 3.89 team ERA.

There is a lot of offensive star power missing from this rivalry series between two of the best in the NL East. Both squads have been playing good baseball even with the losses, and Wednesday’s battle should be the same. Atlanta’s offense gets the nod in this one, and with Harper on the shelf, it is going to be difficult for the Phillies to match it.