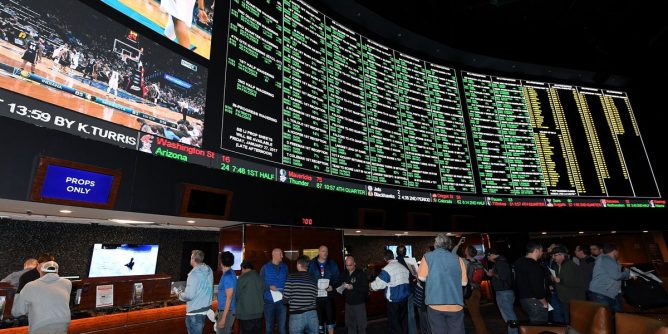 The sports betting industry has faced a summer slowdown as August will be the last month before the pace picks up again. The Arizona Department of Gaming released its numbers on Friday, showing a 10 percent drop in the handle but record revenue.

According to the Arizona Department of Gaming, the handle dropped once again. Sportsbook operators across the Copper State registered a total handle of $461.45 million in May, which noted a decrease of 10 percent from April’s $512.8 million.

As expected, nearly 99 percent of the wagers accepted were placed online by bettors throughout the state. Online sports betting has become the standard in the state as users of these platforms have many options to choose from.

Still, the sports betting handle had its lowest month when excluding September. Baseball doesn’t bring that much interest when compared to football and basketball. Arizona’s total handle is still ranked sixth for the month as it’s clearly a top 10 market in the industry.

Handle Numbers May Have Been Down But Revenue Saved the Day

The handle may have experienced a drop; however, bookmakers had their best month since the launch began in September. Sports betting revenue for the month was almost $55.2 million after payouts and federal excise tax. The previous record was established in November as sportsbook operators claimed $50.2 million.

Operators in the state also set a new record high as the results favored the house for the month by a wide margin as operators like FanDuel, BetMGM, and DraftKings led the way. Gross revenue spiked by 88.6 percent from April’s $29.2 million, thanks to a record hold rate that was just short of 12 percent.

The previous record was set in the first month of operation as September 2021’s hold rate was at 10.9 percent. This was also a major improvement from April’s hold rate of 5.7 percent.

Arizona is also one of those states that allow bookmakers to use promotional credits and deductions. The adjusted revenue total for the month was $41.4 million for May, as the state was able to collect $4.1 million in taxes for the month.

It was just the second time the state collected $2 million in taxes for the month. Over the first five months of the year, Arizona has generated nearly $10.3 million in taxes and $16.2 million since the operation began.

Ted Vogt, director of the ADG, stated in a press release;

“Since the start of legal event wagering, we have seen approximately $30 million in privilege and licensing fees contributed to the state.”

Which Operators Took Advantage of the Record Hold Rate

As it was the second straight month that FanDuel’s win rate reached double digits, its mobile wagering gross revenue totaled nearly $24 million thanks to an eye-popping 16.1 percent hold on a $148.7 million handle.

Caesars registered a handle of $47.5 million but only had a win rate of 7.3 percent, which lagged behind the top three operators. Barstool rounded out the top five with a handle of $14.6 million.

Sportsbooks and bettors are waiting for the NFL season to make its return as the average betting volume will skyrocket. Arizona’s monthly handles will likely drop for July and August before the volume picks back up.