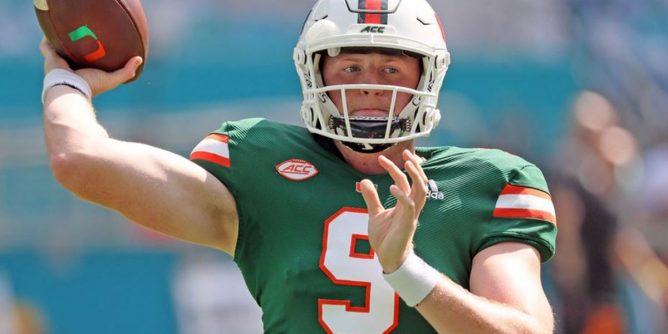 One of just two top 25 matchups in Week 3, the #24 Texas A&M Aggies (1-1) host the #13 Miami Hurricanes (2-0) in a non-conference bout between the SEC and ACC. The two teams have played each other just three times in the school’s history, with the Hurricanes holding a 2-1 advantage.

Saturday’s kickoff is at 9 p.m. EST at Kyle Field in College Station, Texas. The Aggies are a 6.5-point favorite, and the over/under total is 44.5 points.

What to Know – #13 Miami Hurricanes

The Hurricanes are 2-0 and looking for an early season signature victory. Miami will be on the road for the first time in the Mario Cristobal coaching era. Cristobal took over the Miami program after a 35-13 record at Oregon over five seasons.

Starting quarterback Tyler Van Dyke has thrown three touchdown passes and one interception through the first two contests. The sophomore signal-caller has completed 33-of-45 passes for 454 with a 175.6 QB rating.

Sophomore running back Henry Parrish Jr. and classmate Thaddius Franklin Jr. lead the rushing attack for the Hurricanes. Parrish is the lead back, carrying the ball 37 times for 217 yards and four touchdowns, while Franklin Jr. adds 21 attempts for 127 yards and three scores.

Xavier Restrepo is Van Dyke’s favorite target, catching 11 passes for 172 yards and a touchdown through the first two contests. Michael Redding III and Brashard Smith have five and six catches apiece, and Ke’Shawn Smith found the endzone with one of his three pass catches.

Texas A&M had high expectations for the program after defeating the Alabama Crimson Tide last season and bringing in one of the top recruiting classes in the nation. That all fell apart last week when the Aggies paid Appalachian State $1.25 million to come to Kyle Field and beat them, 17-14.

Haynes King is the Aggies’ starting quarterback, and the sophomore is completing 64.7% of his passes (33-of-51) early on in the season. King has thrown for 461 yards, passing for three touchdowns while also throwing a pair of interceptions.

Through two contests, the Aggies have rushed for 193 yards and pair of touchdowns, most of the damage done by Devon Archane, who’s rushed 28 times for 108 yards and the Aggies’ only rushing TDs. King is second on the team in rushing with 52 yards.

A pair of Aggie wideouts already have over 100 yards receiving. Veteran Ainias Smith paves the way hauling in ten passes for 185 yards and two scores, while true freshman Evan Stewart has caught ten passes for 105 yards.

Kyle Field will be electric on Saturday night when both teams take the field, creating a hostile environment for the Hurricanes.

Miami looks like a different team under Cristobal, and while they haven’t played a blue-blood program this season, the ingredients are there for a successful season.

Texas A&M will bounce back, but this is a great spot for Miami in Week 3.